At a certain point, anyone who goes to workout at fitness centers and general public gyms has experienced a very common issue, which to be honest, annoys the hell out of me. Whether is leaving dumbbells all over the place other than the dumbbell rack, or leaving the leg press, bench press, smith machine or squat rack loaded with plates, I find it very disrespectful when people don’t re-rack the weights after they’re done using the equipment. 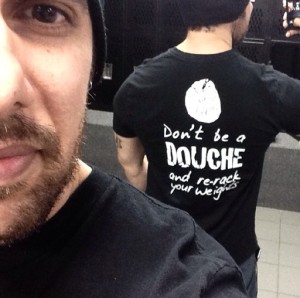 I personally consider re-racking weights part of my workout. I understand if one lifts very heavy, after finishing the exercise the last thing we want is to be picking up more heavy weights, especially 16, 18 or more 45 lbs plates from a leg press machine, but the way I see it is, you’ll be pushing your body even further by getting the benefit of lifting more weight but also leaving the equipment ready for others to use.

It won’t be the first time I have stopped my workout to go help women unload weight from the equipment they’re about to use because some brainless douche decided to walk away from the squat rack leaving the barbell with three 45 lbs plates on each side of the bar. Let’s say you an uneducated animal who don’t care to help other guys at the gym, but at least do it for the women who also use the equipment. Although you probably won’t care anyway if someone sees you as a walking piece of sh*t for having an attitude at the gym, but there is no reason why you shouldn’t leave the gym equipment ready the way you found it when you first were going to use it. It’s not your fucking gym!

Another issue I see all the time is how mainly guys would leave a bench dripping sweat from top to button and not taking a minute of their time to wipe the bench off. I’d like to know how they would feel if I was to stand next to them, wipe the sweat off my face with my hand andÂ rub it on them. I’m sure their reaction won’t be a nice one. So then why the hell would you leave a bench in such condition when you’re done using it?

I think part of the blame goes to the gym and their employees. Many of this big chain gyms have signs asking members to clean after them, to re-rack weights, and yet the employees won’t move a finger to let members know they need to follow rules. I worked for a small private owned gym for almost a year, and we would walk to members and ask them if they were done they needed to re-rack the weights. I can tell you after the second time they would start doing it without being told to do so.

My only wish is that this post gets to many people and somehow get them thinking about this, and hopefully they start changing their habits at the gym.

One thought on “Gym Courtesy”