It has been quite a few weeks since I finished Shortcut to Shred, and for one reason or another I wasn’t able to do a final review. Today, I’m finally able to sit down and share with you my final thoughts about the program based on my own perspective, experience and results.

As mentioned before, Shortcut to Shred seemed to be a promising solution to cut down or shred body fat. The concept, which is mainly based on reducing carbohydrates during a 3 phase setting, puts you on a caloric deficit, which one way or another would make anyone lose weight. Of course, the main goal is to lose body fat and little to no muscle mass, but this is where it gets tricky.

My Experience
I have to admit that, as much as I tried to stick as close as possible to the macros, I found it pretty hard to reach the amount of fats I needed to eat without affecting the protein and carbs quantities. It could have been easy to just add a spoon or two of olive or coconut oil to my meals, but I wasn’t a big fan of that idea. So other than the fats (which make for a lot of calories) I was pretty accurate with the rest of my macros.

During phase one, the amount of carbs gave me plenty of energy, not only to do the exercises in between each set, but also to lift very heavy. During phase one and two I was able to achieve new personal goals, lifting up to 315 lbs on my deadlifts, and over 800 lbs on legs press, but the motivation and happiness didn’t last long. Phase three requires to eat one third of the initial amount of carbs eaten during phase one. This, for anyone familiar of how important carbs are for energy purposes, was a major hit on my performance. My energy levels dropped dramatically affecting my workouts from the amount of weight lifted to the amount of reps, and in some cases sets. Forcing myself to reach the amount of weights I was used to lift during phase one and two became a painful experience realizing my body wasn’t capable of performing the same way without enough carbs.

One major problem with this program, and personally my biggest concern is, that while my body fat percentage dropped, I lost muscle mass during the time I did this program. This, is the one thing those of us who worked really hard for will want to avoid at all cost. I personally blame it on the constant low carbs during the third phase of the program. I think if at least there would have been some kind of cycling, it would have been the best option, not only to keep the energy and strength, but also to retain muscle mass.

Conclusion
If you are looking to drop weight, mainly from fat, but also sacrifice some muscle along the process, this program will probably be a great option. You’ll have to be mentally strong to fight the lack of desire to do cardio in between sets, especially during phase three. One thing is for sure, I wouldn’t try to do this program again, even if I was in a hurry to lose body fat in a short period of time, not unless phase three had me eating more carbohydrates. 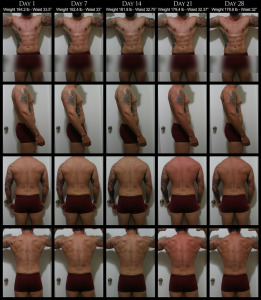